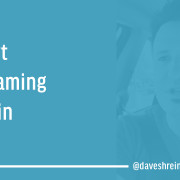 We all started out as dreamers. Now, you may find yourself saying, “I guess this is just what I’m meant to do,” as you consider your current lot in life, but it wasn’t always that way. As a child you were a dreamer. You could do anything you wanted and everyone around you thought it was cute. As you grew something changed and suddenly the word “realistic” became vocabulary you heard more often.

It’s time for you and I to get back to what came naturally to us: dreaming.