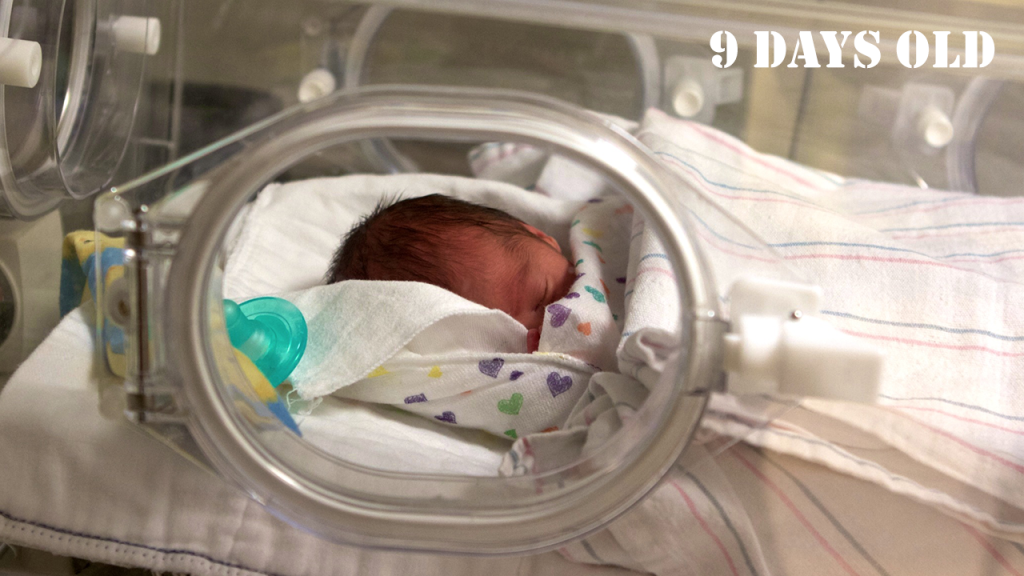 [Pictures at the Bottom]

Thank you to those who have been praying for us and offering to help our family with anything we need. It is so encouraging to know that we are not alone and that Isaac is loved through your love to us!

Because so many have continued to ask for updates on how Isaac is doing, I’m taking time today to share his status. I’m not changing themes on my blog, just taking this opportunity to answer the many questions that have come our way.

Next week I will return to posting my thoughts and observations on leadership. Thanks for hanging in there with me during this transition.

Isaac Michael is 9 days old! He continues to grow healthier and stronger every day. From the moment he was born, the nurses all said he is a model preemie. Not like en vogue, but rather, he is the best case scenario when it comes to a baby born at 34 weeks.

It has become very commonplace for newborns, full term or preemie, to receive UV light therapy for what is known as Jaundice. Jaundice is a yellow color in the skin caused by excess bilirubin in the blood. Bilirubin is broken down in the liver and through the intestines. When babies are not eating enough to kick-start the cycle of breaking down the bilirubin, they will receive UV light therapy to help this process until they begin eating more.

One day last week I walked into Isaac’s private suite (he has his own room) and found him in a chamber… the nurses were very quick to catch me and assure me it was nothing serious.

Believe it or not, it takes a lot of energy, and thus calories, for a baby to keep their temperature at a normal level. Because of his smaller size, the nurses decided that it would be best to place Isaac in a warming crib to allow him to conserve calories. This would also help his capacity to conserve energy, take in more calories, and gain weight. He spent 3 or 4 days in the warmer but was removed and is now in a normal crib!

Isaac has only known having an IV in his arm. About 30-45 minutes after he was born he was given an IV through his wrist to begin receiving sugar water along with other vitamins and minerals he would have been receiving in the womb. They basically had him on a baby Gatorade.

On Monday, the 13th, nurses removed the IV. It was a huge encouragement to both of us as well as Isaac. No one likes having an IV, no matter the age. In my opinion, since the IV was removed he looks better and I see more growth in him. It could just be me though… I’m hoping for a sports athlete and maybe I’m just seeing what I want to.

Since being born on the 7th, he has eaten like a champ. Nurses were feeding him every 3 hours and steadily increasing the size of his meal every 12 hours. He had been making great progress until Monday when he didn’t finish a significant amount of his meals. Nurses inserted a feeding tube through his nose in order to finish his feedings.

It was very difficult to see him with a feeding tube. He was a little uncomfortable, but the difficulty was more in the visual than the actual implications. We would encourage him though, “hey bud, this isn’t nearly as bad as circumcision will be.” I think that lightened his spirits.

On Wednesday, Sondra arrived at the hospital to find that the feeding tube was removed and immediately texted me!

Score 1 for Isaac! (Technically, we should take 1 point away and add another point because he did have to have the feeding tube in the first place, but this is my blog and I can divvy points out how I see fit. He’s got 4 points now.)

We have been shooting to bring Isaac home as early as January 21st. That would be a total of two weeks in the Special Care Nursery. When Sondra arrived on Wednesday, nurses said it would be possible for Isaac to come home as early as Friday. It’s all up to him though. If he continues to eat, put on weight and maintain his body temperature over the course of today (Thursday) and through Friday morning, we could have him home Friday afternoon.

We trust the nurses at Mercy Gilbert and know that they will only release him when we will be able to give him 100% of the care he needs. It looks like that’s possible very soon.

Sondra is doing great! Sleep is a bit hard to come by, but that’s nothing new. She’s been driving and running small errands. You might be reading this thinking, “she needs to be resting,” but really, her energy levels are so good that she is able to do what is best for recovery; get back into a normal routine.

She has been spending 6-9 hours each day at the hospital with Isaac and I’m grateful for that. I knew in 2004 that she would be a great mother… and thus, I locked her down and put a ring on it.

Isaiah is doing well considering the situation. Because I am working every day while Isaac remains in the hospital, Sondra spends the mornings with Isaiah and family watches him in the afternoons. He loves seeing family, but he is ready to get back to a normal routine.

I take him home each day, get him fed and ready for bed. He takes longer to fall asleep now, but I think it’s because he misses his mom.

I am blessed. Sondra is such a champ and doing an amazing job at arranging the daily schedule. It makes it easy for me to focus on my job and then focus on caring for Isaiah. It’s a lot of running around, but I’ve got nothing to complain about. I’m getting a lot of time with Isaiah and, given the circumstances, I wouldn’t have it any other way.

Now To the Pictures

I know you probably just wanted to see pictures so, here you go. Enjoy and hopefully the next batch of pictures will be taken from our own home!

Sondra sent me this video. He’s super alert and looking around so I thought I’d share it too.

Climbing Out of Debt and Overcoming Shame