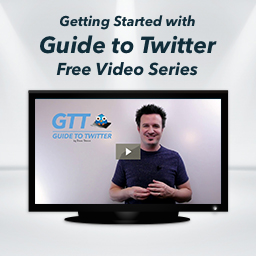 Twitter has been such an influential tool in my life. I’ve been working diligently to compile a video based training guide for Twitter as a way of helping people dream big and find an audience that desperately needs to hear their voice.

Just the other day I was talking with a director of a special needs school listening to her vision for the future of the students and her campus. She expressed that she’s doing her best but since this is the first time she’s done this particular job she’s taking it as it comes. I asked her if she was on Twitter and as I assumed she said no. She said, “I always assumed Twitter was just to tell people what you’ve eaten, not anything valuable.”

This is the reason why I created a free 3-part video series to help anyone and everyone understand Twitter and be prepared to immediately get value out of the network.

Get the first video delivered to your email now

For my director friend there is a community on Twitter right now talking about the things she’s currently learning. There is a community of special needs educators who have already been through the challenges she is experiencing. I asked her if there was a party where a large group of her counterparts would be hanging out, would she go?

It can be scary to try a new platform because it forces us to come face to face with our own insecurities. When I first signed up for Twitter years ago I walked away frustrated because I didn’t understand it and would rather give up than look dumb.

Dreaming can be the same way.

I know what it is to give up on dreaming because you’ve had your dreams stomped on. Growing up I would have a new dream every week and every week I would be told by teachers and adults to be realistic. The same thing still happens as adults. We’re told to be realistic and be responsible… often dreams are neither. We walk away from our dreams because we’d rather give up than look dumb.

But let me ask you, do you still have a dream? What is it that makes your heart beat? What interests you to the point that you would love to spend all your time focusing just on that? If there was a part with a room full of dreamers just like you, would you go?

The truth is that room exists and there’s a party cup with your name written on it in with a Sharpie. The room is called Twitter and I’d love to show you exactly how to find your way into that room cause I believe it could change your life… as it has changed mine.

GET THE FIRST VIDEO

What’s One Reason that You’re Holding Back From Twitter?

Thankful | How I Started My Podcast, Thanks Chuck

Move Closer to Your Dream

Thankful | All About Helping People
Scroll to top