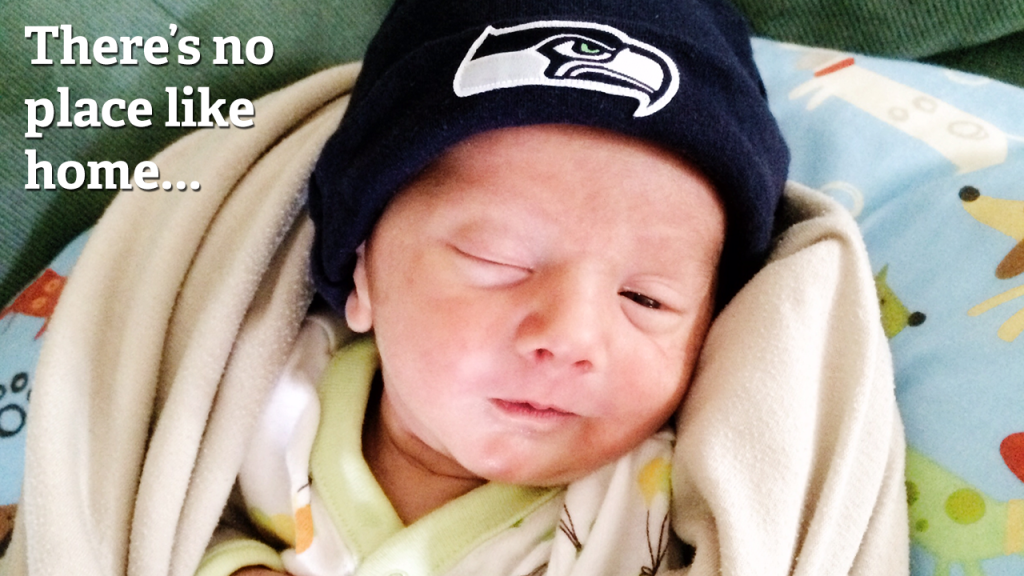 In short, baby Isaac is home. That is the answer to the question I’ve received more than any over the past week and a half. In fact, we were able to bring Isaac home on January 17th. It was four days earlier than expected and not a moment too soon. We are grateful for the staff at Mercy Gilbert and the attention they gave our little preemie, but we are thankful to be home, together as a family.

Isaac is now 3 weeks old and growing like a champ. He weighed in at 5lbs and 11oz at his pediatrician’s appointment last week.

Establishing a daily routine is one of the most valuable things a parent can give to their young child. Isaac’s routine pretty much revolves around eating every three hours. He gulps down 2 ounces of momma’s special blend and then passes out. He looks like, what can only be described as, an old man after dessert on Thanksgiving. It’s cute though… there’s no unbuckled belt buckle… Just pure cuteness.

Between eating, he spends approximately 20-30 minutes awake and alert. He doesn’t like being left alone when he knows things are going on. He wants to be propped up so he can see.

Night time has been a struggle. He does not like sleeping in the pack ‘n play so we are experimenting with ways to make it more comfortable for him. He sleeps like a baby (pun intended) when he’s on our living room sofa, so I think I’m going to remove a couch cushion and put that in the pack ‘n play. We’ll see how that goes.

Baby Boy One has been doing really well. Sondra and I were discussing that he really hasn’t had a set routine since before Christmas. With family visiting, Christmas and now Isaac being born, it’s been a whirlwind for him. This lack of routine rears it’s ugly head mostly at bedtime and nap time . Only in recent days has bedtime returned to normal. Normal=we lay him down, he falls asleep. We’re grateful the screaming has stopped 🙂

I have spent a lot of time with my big boy the past two weeks. I took him to the zoo one morning last week and he really came alive. Another afternoon we went to QT for treats. He got a blue raspberry icee, I got a tea and we split a steak and cheese taquito. It was delicious.

Big brother has been really sweet towards Isaac. He loves giving hugs which is really just him touching his head to Isaac’s, but he’s so gentle and sweet about it.

Mom & Dad’s Routine Two is definitely harder than one. We plan man-cover right now but when the day comes that we have a third child, we will have to switch to zone. It’s a blessing that we are grateful for, but it has also taken more sacrifice of self than anything else.

Sondra gets up with Isaac through the night and I take care of Isaiah all morning. The rest of the day is going back and forth feeding each of them, cleaning each of them and comforting each of them. It is hard, but it’s also rewarding. Seeing Isaac explore his surroundings and hearing Isaiah say new words each day is the little bit of fuel we need to keep going.

Thank you for your continued concern and prayers. We are very grateful for the support we’ve received. Please continue to pray for our family and the relationship between Sondra and myself.

Now, here are a few more pictures of baby Isaac at home!

Tim Tebow Was Destined to Make a Difference

A Leader Protecting His Team
Scroll to top